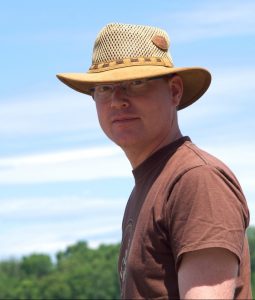 Vincent van Hinsberg is an extraordinarily talented and productive young scientist with broad interests who is one of the leaders of a new generation of earth scientists using mineral chemistry and petrology to address fundamental geological questions. He is widely recognised for extending the application of Lattice Strain theory to hydrothermal processes, and has used it to great effect in determining the compositions of deep fluids as a means of interpreting aspects of Earth’s early history. This was a fundamental breakthrough, because it allowed for fluid compositions to be quantitatively reconstructed from minerals, in any geological environment, something that had not previously been possible. Vincent is also an internationally recognised expert on the physical controls of element uptake by minerals, and through experiments and with ab initio calculations, he has greatly expanded the range of pressure-temperature conditions for which Lattice Strain Theory is applicable. Thus, he has applied the theory to successfully predict the behaviour of rare metals in REE mineralised alkaline intrusions from the compositions of sodic pyroxenes and amphiboles, and determined the compositions of fluids released from a subducting slab by modelling the dependence of phengite-fluid partition coefficients on pressure and temperature. In addition to his work with Lattice Strain Theory, Vincent is also having a major impact on the debate over whether plate tectonics in early Earth history involved vertical or horizontal accretion. His research on the Tartoq greenstone belt in Greenland provides evidence of a tectonic style at 3 Ga consistent with subduction, but with plate motion at a much shallower angle than at present. The latter resulted in a hot slab that started melting at shallow depth. As a result, the slab was buoyant and weak, and not able to generate a significant slab pull force nor transmit it to the up-dip oceanic plate. This is a fundamental discovery, because it means that horizontal tectonics was already operating three billion years ago, although it would have needed a different driving force. It also suggests that plate tectonics can operate under a variety of planetary states. In conclusion, Vincent van Hinsberg is an outstanding young scientist who has made major contributions to geology and has all the qualities expected of a recipient of the W.W. Hutchison Medal.

Please email stefanie.brueckner@umanitoba.ca to get the Zoom meeting details to attend any of these talks!

Deciphering the compositions of fluids in the Earth: Rubies, volcanoes and the origins of life

Hosted by University of Calgary

Sending probes into the deep Earth to understand subduction

Deciphering the compositions of fluids in the earth: Rubies, volcanoes and the origins of life