The Howard Street Robinson Medal recognizes a respected and well-spoken geoscientist who will further the scientific study of Precambrian Geology and/or Metal Mining through a presentation of a distinguished lecture across Canada. The medal is named in honour of Howard Street Robinson, a founding member of the GAC whose bequest to GAC in 1977 of approximately $100,000 makes the lecture tour possible. The bequest was ”for the furtherance of scientific study of Precambrian Geology and Metal Mining”. Thus the GAC’s Mineral Deposits Division awards the medal in odd years, and the Precambrian Division awards it in even years. The lecturer is nominated and chosen by the Howard Street Robinson Medal Committee.

The 2020 and 2021 Virtual Lecture Tours will be underway starting next week!

If you would like to attend any of these talks please email Stefanie Brueckner for the Zoom details at Stefanie.brueckner@umanitoba.ca.

(Abstracts are posted below) 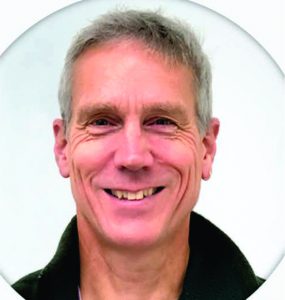 Dr. James Mungall received his BSc in Geology from the University of Waterloo in 1987.  He did his MSc and PhD in igneous petrology at McGill University, finishing in 1993.  He did two years of postdoctoral research at the Bayerisches Geoinstitut followed by nearly three years of consulting in Quebec before joining the University of Toronto in 1999.  He has worked as a consultant specializing in magmatic sulfide and chromite deposits since 1996 and spent one year as a Chief Geologist for Noront Resources during the discovery and definition of their Ring of Fire deposit group.  In 2017, he joined Carleton University, where he now teaches mineral deposits.  His research topics range from transport properties and thermodynamics of magmas to description and interpretation of mineral deposits. 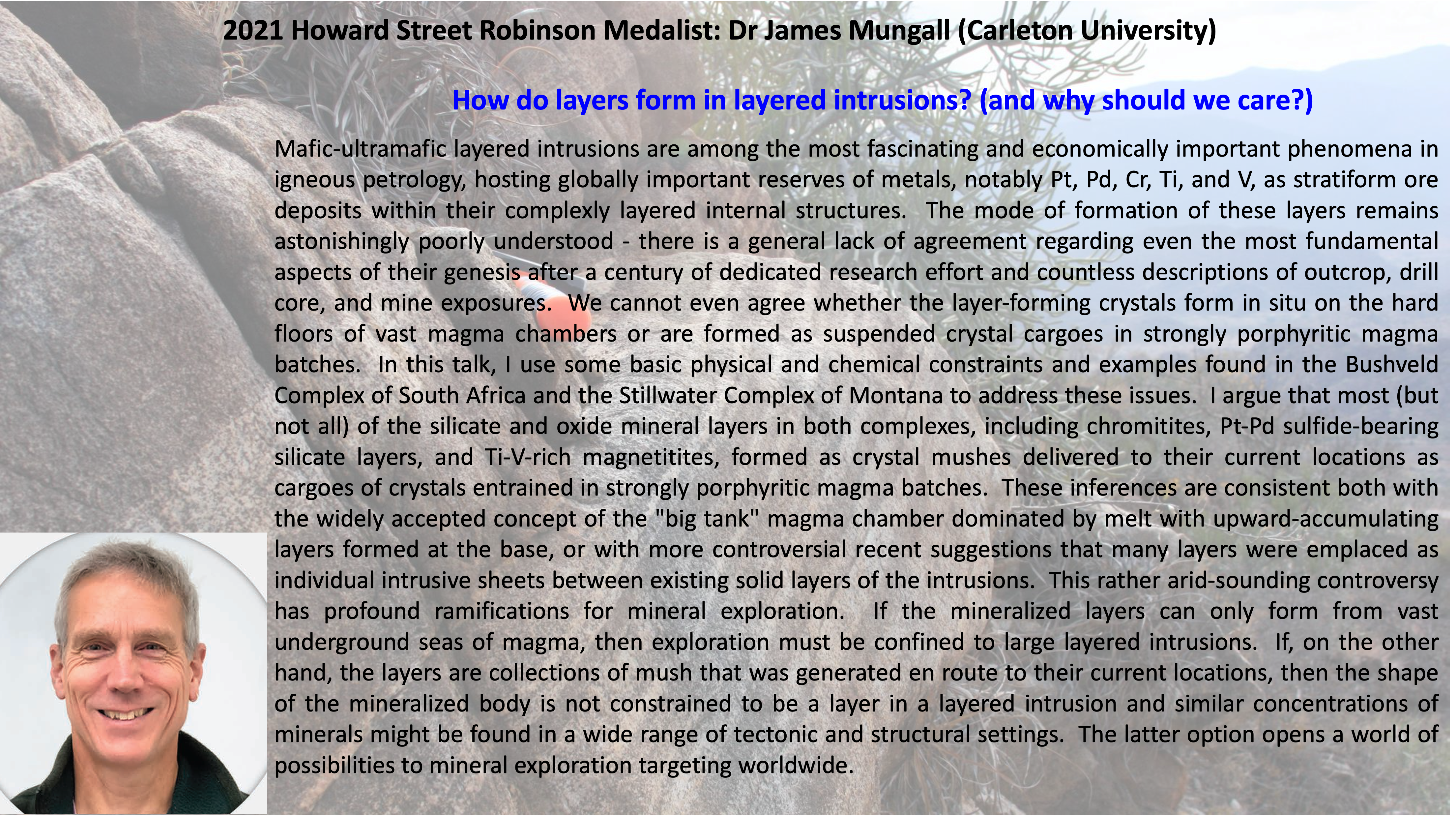 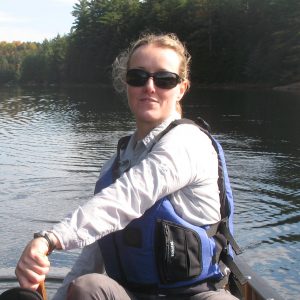 Dr. Turner’s research centres on the tectonostratigraphic, paleoenvironmental, and paleobiological evolution of Proterozoic and Paleozoic sedimentary basins, and what controls their potential to host ore deposits. Her expertise is founded in 30 years of remote mapping and stratigraphic work in Canada’s north, and in detailed microanalytical studies of depositionally and diagenetically complex sedimentary rocks. Areas of special focus in the Precambrian have been the Neoproterozoic of the Mackenzie Mountains (NWT), the Mesoproterozoic of northern Baffin Island (Nunavut), and lately, Neoproterozoic puzzles in the Central African copper belt (Zambia and the Democratic Republic of Congo). Dr. Turner received BA and BSc degrees from University of Toronto (1988 and 1991), and a PhD from Queen’s University in Precambrian carbonate sedimentology and paleobiology (1999). After a post-doctoral fellowship at the University of Alberta on modern spring precipitates, she assumed a position at the newly established Canada-Nunavut Geoscience Office in Iqaluit, mapping in the Paleozoic-hosted Cornwallis Zn district of Nunavut’s Arctic archipelago. Dr. Turner has been at Laurentian University since 2005, teaching paleontology, carbonate sedimentology, and Earth history, and fostering an international-calibre research group focussed primarily on Precambrian basins and their economic potential. 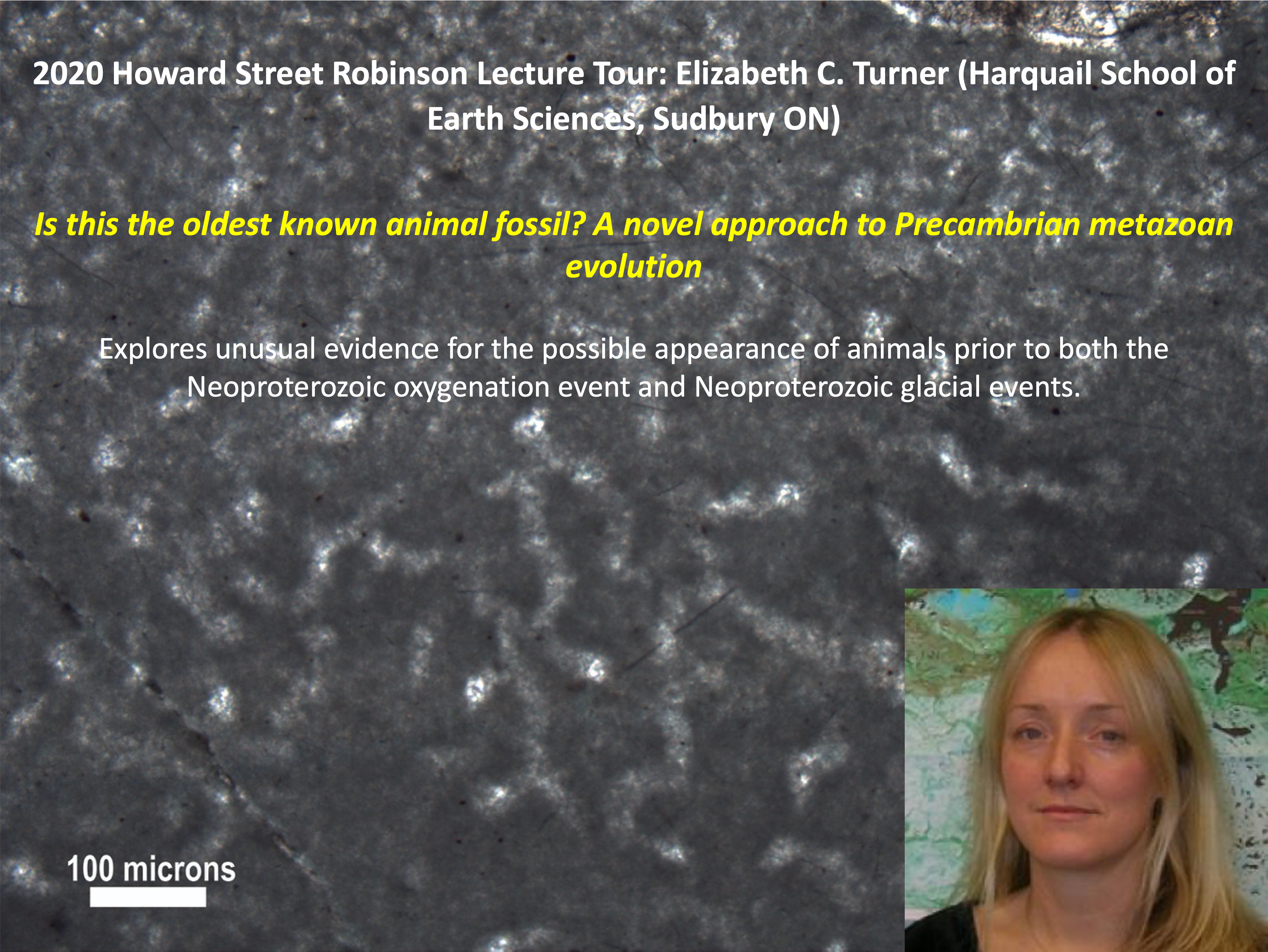 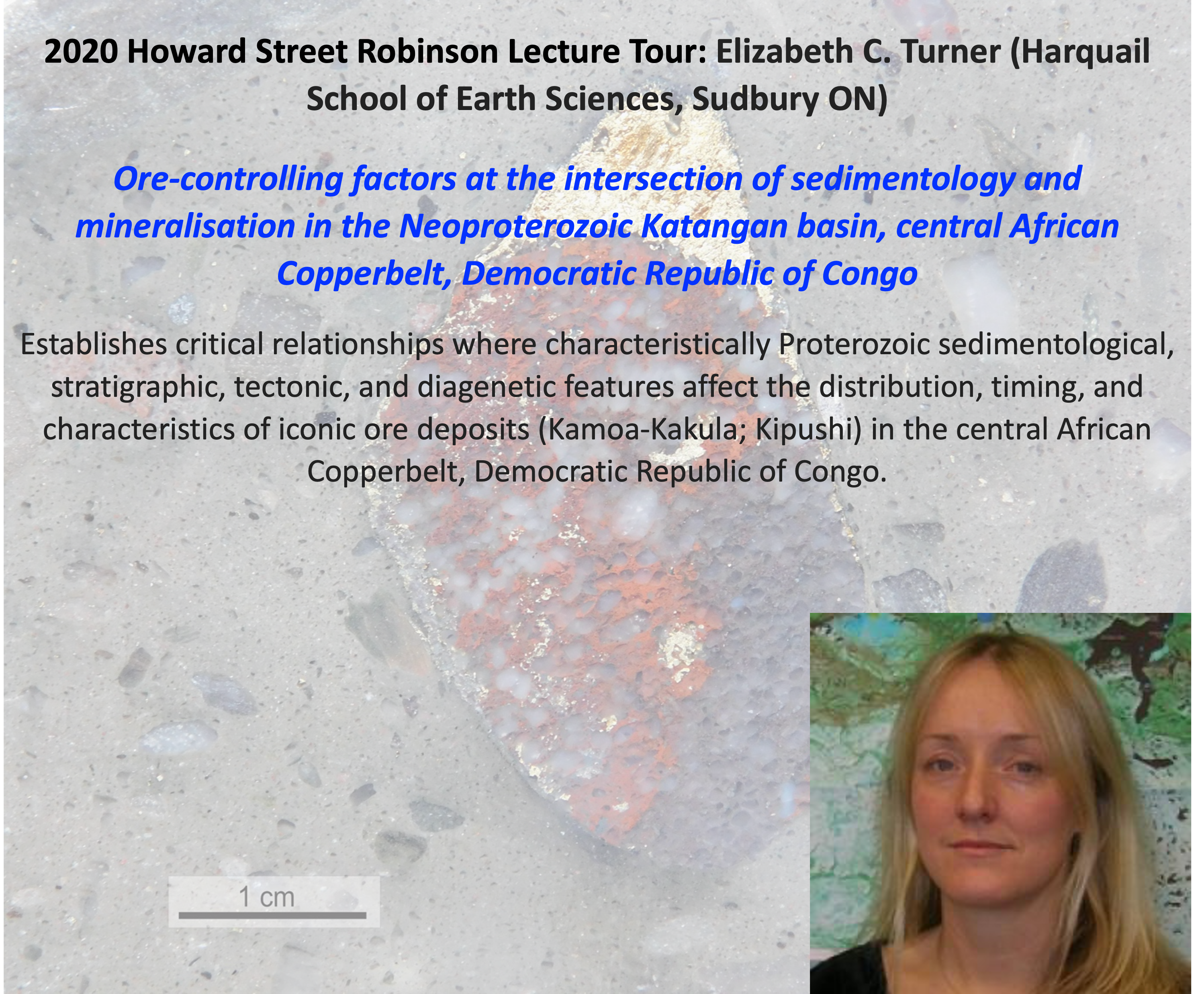