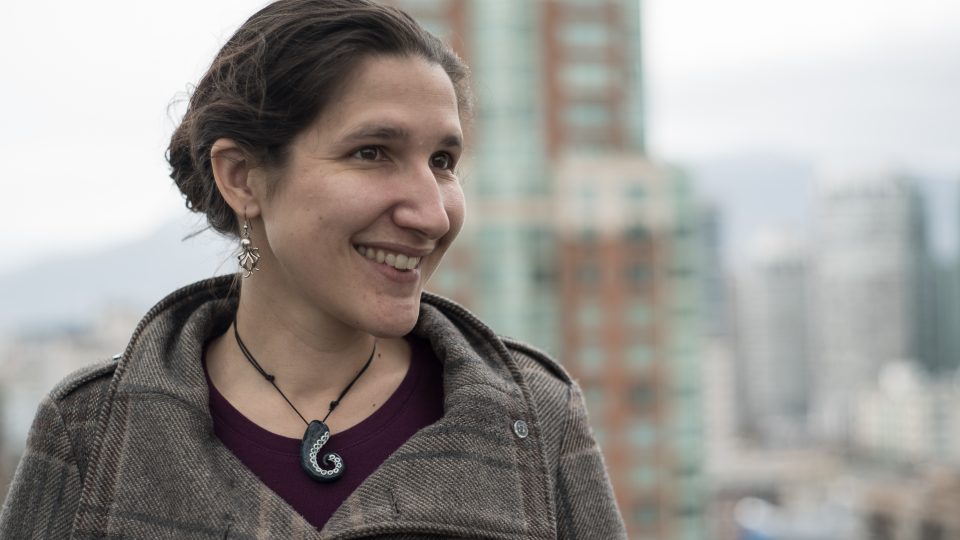 The Neale Medal, named after the legendary E.R. Ward Neale, is awarded to an individual for sustained outstanding efforts in sharing Earth science with Canadians.

The medal shall recognize outstanding efforts to communicate and explain geoscience to the public through one or more of the following vehicles: public lectures, print and electronic-media articles, school visits, elementary and secondary-school educational materials, field trips, science fairs, and other public communication devices. It also shall recognize exemplary records of promoting public-awareness of geoscience activities through the sustained encouragement of, and participation in, the creating, planning, organizing and implementing of such activities.

“For innovative, engaging, and impactful communication of the Earth sciences, particularly geophysics and disaster preparedness, across media including print, radio, television, movies, and social media.”

Mika McKinnon is an internationally recognized science communication expert who specializes in sharing Earth science in novel and creative ways on platforms including print, radio, television, movies, and social media. Throughout her career she has combined technical expertise, such as teaching field geophysics and disaster preparedness in British Columbia, with innovative earth science educational approaches, such as incorporating realistic scientific scenarios into fictional movie productions. Her work has educated, engaged, and energized countless Canadians to better understand Earth science.

Trained in geohazards such as landslides, McKinnon has worked in outreach and communication roles with various agencies involved in emergency preparedness. These roles include consulting with the US FEMA on best practices in communicating Cascadia quake risk and serving as a UN delegate on risk reduction. McKinnon is frequently quoted in Canadian media on disaster response and can often be found in Vancouver-area community meetings talking about preparedness.

On social media McKinnon combines technical expertise with innovative approaches to outreach to produce timely, educational and engaging content. When natural disasters strike the Pacific Northwest, she reaches her nearly 69,000 followers on Twitter with detailed, scientifically grounded information about what affected communities should do. She also artfully tucks in Earth science education, such as explaining the hydrologic concept of “bankfull width” during recent flooding in British Columbia.

McKinnon has also run Twitter campaigns that inform readers about Earth science in a truly delightful fashion. Each post in her #YouFindARock campaign starts with a photograph of an intriguing rock or mineral, and then leads into a choose-your-own-adventure type of experience where readers decide what tests to run to figure out the rock’s geology. (If you’ve ever picked up an unusual rock and felt an urge to lick it, or done a “rock check”, you might have been reading her recently.) In 2019 McKinnon began helping administer the @MineralCup competition that happens on Twitter each September, where people can vote on their favorite mineral. She doubled public engagement with the cup, which in 2021 had 8 million impressions and over 100,000 votes.

McKinnon is an on-screen geophysics expert for documentary series including the Science Channel’s Phantom Signals and the Discovery+ series I Got Lucky, and a behind-the-scenes consultant for the sci-fi show Stargate. She has also demystified Earth science in many popular articles for publications including Wired, Smithsonian, New Scientist, and Gizmodo.

The deadline for National Medal nomination forms is November 30th.